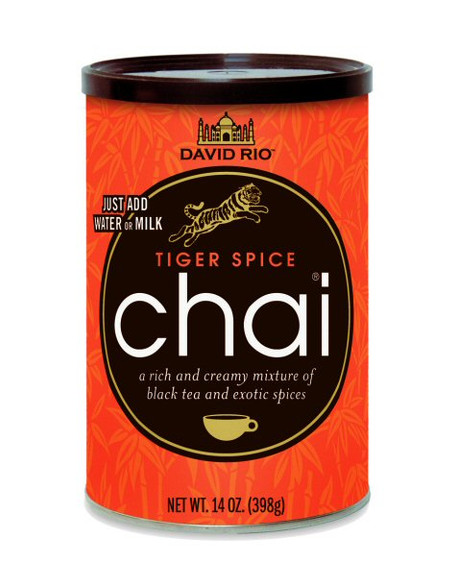 Hover over main image to zoom

David Rio's signature and award winning chai is a rich and creamy mixture of black tea and premium spices, including cinnamon, cardamom, and clove.

Warmed or Iced- Its Very Nice

This Chai is a “must” for Chai fans.

HOW TO PREPARE CHAI

SERVE HOT  Warm your choice of milk on stove top, or by using steam is best.

David Rio's signature and award winning chai is a rich and creamy mixture of black tea and premium spices including cinnamon, cardamom and clove. A percentage of profits from the sale of ALL David Rio Tiger Spice Chai® will be donated to the International Fund for Animal Welfare (www.ifaw.org).

A message from David Rio:

As part of David Rio's corporate philosophy, we support animal welfare groups including Cat Tales Zoological Park and The Peninnsula Human Society & SPCA. Back in 1999, to commemorate Tiger Spice Chai, we even adopted a Bengal tiger, named Thor. We encourage everyone to make a difference in the life of an animal by supporting animal welfare groups and either adopting from or volunteering at your local Humane Society or SPCA.

On an annual basis, David Rio will have reduced its carbon emissions impact by over 25 tons and have removed over 30 tons of garbage from the waste stream, an integral part of David Rio's mission of becoming a green company.

All prices are in AUD. © 2022 My Coffee Shop Online. Sitemap | Shopping Cart Software by BigCommerce